Saturday morning, before most of Starkville had woken up, Dan Mullen had the day’s schedule churning through his head: load up at the Seal Complex, drive over to Davis Wade Stadium for the second of his team’s three spring scrimmages (where he hopes to find a replacement for Dak Prescott, break in an entirely new defensive staff and try to put together a team capable of competing in the brutal SEC West), drive back to Seal, meet with his staff, break down the film and get ready for more practice on the final week of spring. Then, if he’s lucky, he’ll be home before his kids are asleep, with enough time to watch Disney Channel or play in the yard.

This was all running through his mind as Mullen himself was literally running through Starkville. Mississippi State’s head football coach woke up at dawn and ran 13 miles around town last Saturday, entering the final week of his training before he attempts the Boston Marathon next Monday.

“He even got another little workout in after the scrimmage,” his wife Megan shared. 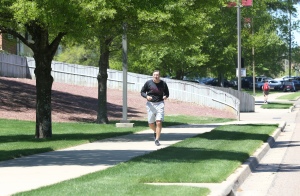 To be “more” into running than Mullen was previously wouldn’t take much, if he’s being honest. As long as he’s been at MSU, the head coach has made attempts to jog when he can, but his regimen then was akin to eating one salad per week and hoping it would balance out the burgers, steaks and potatoes of the other 20 meals.

Mullen has always had his tradition of running around campus on Fridays before home games. And over the years, he’s been known to hit the treadmill after practice when time allows. However, as he confessed, he was lucky to be getting two or three miles in those somewhat-sporadic instances.

But then inspiration hit last summer. While visiting with Adidas representatives, one man told Mullen about his wife who had recently run the Boston Marathon. She was roughly 500 feet from the finish line two years ago when she saw the bombs go off in the near distance.

Mullen’s progress in the Boston Marathon on Monday can be tracked using his bib number, #29394

Mullen, a native of the New England area, was inspired upon hearing the story and recounting the strength of the Boston people in the face of tragedy and the determination of an entire country to help them back on their feet. Though he was a novice runner, at best, completing such a race had always been a dream for Mullen, particularly one so close to home. The opportunity to do something tangible about the emotions he felt combined with the chance to realize a dream was enough to convince the SEC football coach that he was going to run a marathon.

“Growing up in New England, if you’re gonna run a marathon, it’s going to be the Boston Marathon,” he said. “I talked to the people at Adidas and they said, ‘We have a waiver to get you in.’ I said, ‘If you’re gonna do that, I better start training.’”

So, last summer, the training began. Slowly, at first, but Mullen was determined. He wanted to run the race, and he wanted to finish it. Not only do that, but he wanted to do some good for the world around him by accomplishing that goal. He wanted to support the people of Boston, and most importantly to him, he wanted to support the people of Mississippi. In lieu of a charity dinner or other such exercise, the Mullens have made the running of the Boston Marathon their primary fundraising event this year for the Mullen Family 36 Foundation, their charity supporting 36 children’s charities across the state of Mississippi.

Lucky for Mullen, his two brothers-in-law John and Wally happened to be the perfect teachers. John ran the New York City Marathon last fall, while Wally has competed in everything from marathons and ultra-marathons to the Iron Man competition. The three of them will be running together in Boston on Monday after nearly a full year of hard training for their football-coaching brother-in-law.

“Once you get into it, though,” Mullen said, “you really start having fun. I really enjoy running. I went from every once in a while trying to get 2-3 mile runs in, to now, most mornings I’m going at least six miles, and I try to get some longer runs in on the weekend.”

The training has changed his habits, for one, as he gets up even earlier than he did before, the morning being the one place he can carve out extra time for running. The training has also changed his body, as Megan has watched her husband drop 25 pounds from his frame. And finally, the training has developed what Mullen already considered one of the most important parts of his job: mental toughness. 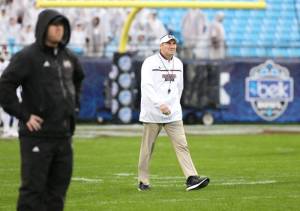 Mullen at the Belk Bowl in December 2015 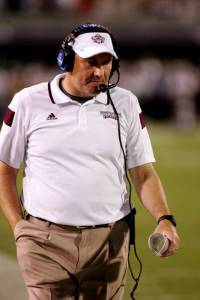 Mullen during MSU’s season-opener in August 2014

Relentless effort is the mantra he preaches to his team, and by training for the Boston Marathon, he has visibly put action to his words, showing his players what he means.

“I don’t know that any of them would volunteer to run with me,” he joked, “but I think it’s one of the things we always talk about. It’s building a mental toughness, I think, the opportunity to go run a marathon, or go finish a marathon – we’re gonna find out. I’ve heard once you get to Heartbreak Hill around mile 21, it really tests your mental toughness and what you’re made of.”

Asked the blunt question, if her husband would be able to finish all 26.2 miles, Megan replied, “Oh, absolutely.” She’s seen him train, and seen the ease with which he ran half the distance and then went on to coach a practice in the mid-day spring sun without even getting tired.

She confessed, though, she had to push him a little, thanks to his confidence in his mental toughness.

“He likes to think that because he’s a football coach he’s got the mental edge on everyone,” she said with a laugh. “And I agree, but I told him, that’s still pretty tough.”

“I want to get the picture of me crossing the finish line,” Mullen later said. “I’ll get my bib framed. I’ll put my time on there. And I’ll put it on my checklist of goals accomplished in life.”

It’s always been a dream for Mullen, and after so many years of life, he spent the last one making it possible. He’s still got the race to run (and finish), but already, he feels like he’s accomplished a great deal.

“I’m living one of my dreams and raising money to help young people in Mississippi go out and live their dreams,” he said. “I think it’s a special opportunity.”

This entry was posted in Uncategorized. Bookmark the permalink.