Mississippi State’s uniforms are among the most classic in college baseball, a collection of seemingly timeless looks. In the millions spent on the design, production and implementation of uniforms on a yearly basis across the country, the maroon and white (and black and gray) garb worn by the Bulldogs came about in a decidedly Mississippi State way. 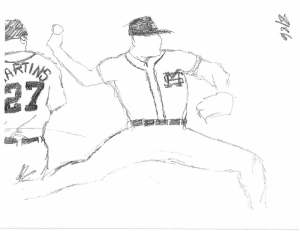 30 years ago in the fall of 1986, a recent MSU graduate and insurance agent by the name of John Marchetti drew them up with a charcoal pencil in his spare time and mailed them to then-head coach Ron Polk, all because he didn’t really like the ones the team had been wearing lately.

He had an interest, sure, but he had almost no connection or reason to be the original designer of the mainstays of his favorite school’s uniform lineup. He didn’t know Polk. He wasn’t a designer. He didn’t even think he’d get a response, if he’s being honest.

“I just got this wild hair,” Marchetti recalls, “and I’ve got some artistic ability, so I thought, I’m just going to draw some uniforms the way I think they ought to look and I’m going to send them to Coach Polk, who doesn’t know me from Adam.”

Included in his sketches – created with nothing but a charcoal pencil and an eraser on a sketch pad – were three uniforms. One was an updated version of the pinstripes MSU hadn’t used since the 1960s, based on what the New York Yankees wore. Most notably, Marchetti suggested taking the logo on the hat (the letter M laid on top of the letter S) and putting it on the chest of the jersey.

“I said, in my opinion, the M-over-S is the best looking logo Mississippi State has in any sport. You’ve got it on your hat. You ought to put it on your chest.”

Marchetti also suggested what he called the Detroit Tigers look, a white uniform with a maroon collar, as well as an all-gray uniform to be worn on the road with names on the back and a cursive ‘Mississippi State’ across the front. Marchetti even made what was then something of an insane suggestion: black uniforms. 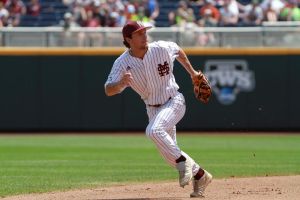 All these designs, notes and the letter typed out by Marchetti’s secretary were sealed in an envelope and mailed to MSU’s baseball office, where Polk may or may not look at it and may or may not care at all. Marchetti told his wife Linda and his good friend John about the designs, and didn’t mention a thing to anyone else.

A week later, the phone in his office rang. He picked it up, not knowing who was calling.

“Is this John Marchetti?” the voice on the other end asked.

“This is Ron Polk, and I’d like to talk to you about these baseball uniforms that you drew and sent to me.”

Now, years later, Marchetti recalls his confusion: “Well, I thought it was John playing a joke on me. So I said, ‘Come on, John.’

Polk then asked if he could put Marchetti on speakerphone so assistant coach Pat McMahon could join the conversation, too. Both coaches told Marchetti how much they liked the designs, asking him questions about some of the details and explaining their thoughts on the entire situation. Polk in particular, Marchetti says, was impressed with the quality of the sketches.

“These uniforms are great,” Marchetti remembers Polk saying, “but what’s really impressive to me are these baseball figures. Where’d you learn to draw like that?”

As the conversation continued, Polk explained that when he took the job, MSU’s retail provider had just sent him boxes of jerseys and told him, basically, “These are your uniforms for the year.” That was about as much thought as had been put into what the Bulldogs wore every week. Well, as much thought as the team had put into it, anyway. Marchetti had certainly been spending a good deal of time with his own imaginations and creations.

And there he was, in that moment, on the phone with the head coach of his favorite team, explaining those ideas to him in detail.

“It’s this surreal conversation,” Marchetti says, “and it wraps up and Coach Polk says, ‘Well, tell you what, Pat and I have already agreed we’re going to do all this. If it’s OK with you, we’re just going to give our equipment manager Phil Silva these drawings and tell him to order them.’

And then they never called Marchetti again.

“I never heard back,” he says now with a laugh. “Isn’t that great?”

In fact, the first he heard about anything actually happening with his designs was at church in Jackson one Sunday a couple months later. Twin boys from the area were freshmen on the team and had come home for the weekend. At church, everyone was asking what it was like playing baseball at Mississippi State. Among the stories they told was a short anecdote from one of the twins on a recent team meeting in which Polk had unveiled the new uniforms they were going to wear that spring.

“It made me real proud,” Marchetti said.

Later that year, as MSU opened up the 1987 season, Marchetti drove up to Starkville and saw his ideas in person for the first time. The Bulldogs were wearing his Detroit Tigers concept.

“I was so pumped, because he ordered them exactly the way I drew them,” Marchetti remembered. “That really made me pleased.”

To this day, Marchetti’s name has been the forgotten one among the prestige of State’s uniforms. Adidas, MSU’s apparel provider now, has often asked where the school got the original designs for the uniforms Adidas now produces for the team, and no one at MSU had known what to tell them. They weren’t sure, either; just knew they showed up one day.

“My kids always ask me what I got out of it,” Marchetti says with another laugh. “I didn’t even get a jersey.”

Not that he ever wanted anything for it. He got his wish when the team wore the uniforms he designed. The pinstripes weren’t used until McMahon became the head coach some time later, but even those are a staple of the collection now (and the ones Marchetti considers to be the best uniform MSU has).

These days, Marchetti drives up to Starkville from Jackson as often as he can for games, and more times than not, he arrives to find his Bulldogs in his uniforms. And little else could make him happier, all of it coming from his suggestion just a few years after graduation that, perhaps, MSU ought to try out something new.

This entry was posted in Uncategorized. Bookmark the permalink.